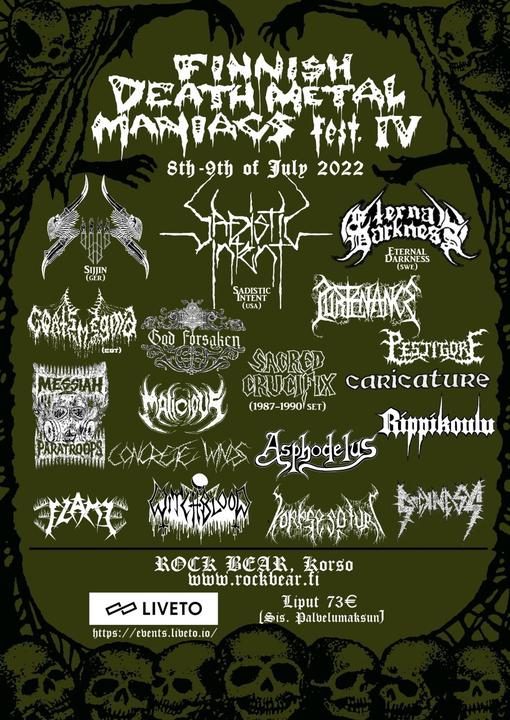 Two unforgettable gatherings of Finnish Death Metal Maniacs took place in Pori in 2015 and 2017, bringing together an insane array of the finest underground death metal acts from Finland and further, and attracting audience from all over the globe. The festival called it quits after the second edition, but got resuscitated for a third round in 2021, now relocated to the capital area. The third edition was also supposed to be “The Last Suffer”, but sometimes the dead just won’t die... and so July 2022 will see the IVth crusade of Finnish Death Metal Maniacs, again taking place on the stage of Rock Bear in Korso, Vantaa!

While the Dutch warmachine Pentacle has unfortunately had to postpone their first descension upon Finland, a more than worthy replacement has been found in ETERNAL DARKNESS. Finnish Death Metal Maniacs have been pestering this early 90’s cult death/doom act from Sweden to get their drunken asses back together ever since the plotting of the first FDMM Fest, but the stars haven’t been right until now. Eternal Darkness is indeed a perfect match for the event, since it isn’t only their line-up that looks suspiciously “Finnish” – consisting of finnjävlar for the most part – but the band’s severely heavy and murky sound also heralds an aura of gloom and doom that is much closer to early Finnish death metal than the groovy Stockholm sound, for example. Eternal Darkness’ path has been a rocky one, ending prematurely as a consequence of line-up and label troubles, with guitarist Jarmo Kuurola’s untimely demise in 1995 being the final nail in the coffin. However, the new millennium has seen the reissuing of the band’s old material, an increasing interest in these timeless tunes of despair and decay, and now their return to the stage is finally at hand as well… come witness Eternal Darkness’ crushing ceremony of doom at Finnish Death Metal Maniacs in July 2022, or rot in regret!

Finnish Death Metal Maniacs up the stench for their IVth crusade, announcing five more acts heavier than life and more morbid than death:
We doubt there’s another band in existence that epitomizes the essence of Underground Death Metal as well as Sadistic Intent does. Three and a half decades in, these Californians are still possessed by the same malignant aura of ancient evil and unwavering morbid faith that spawned the entire genre. Whether the band’s forever-awaited debut full-length “The Second Coming of Darkness” will ever materialize, your guess is as good as ours, but one thing is for sure: Sadistic Intent will show no mercy, when they hit the stage of Rock Bear next July to unleash their furious storm of timeless death metal darkness!

If we rewind to the mid-to-late 80s, to the very twilight of Finnish Death Metal, we find young Northern Finnish thrashers pushing the boundaries of extreme music, with Sacred Crucifix being the most notable of the bunch. Having started already in ’87 as Criminal Assault, it is Sacred Crucifix’s ’89 demo “Realms of Darkness” that really captured their morbid vision, being arguably the first death metal recording done in Finland. The band went on to disband and reunite a few times, even releasing two full-lengths in the first decade of the new millennium, and now they’re back again. As is fitting with the spirit of FDMM, their set at the fest will only encompass the years 1987-1990!

More info about bands, etc. here at this group:

Liveto is an API supercharged event sales platform. Our mission is to help event organizers succeed.